I have a verse in mind when it comes to this topic that may not be close to what you’re thinking. It is a popular verse without a doubt; both with the church and the world – which may be why it’s possibly the most abused scripture in the New Testament. It at least has to be in the top ten!

Here it is: “I can do all things through Christ who strengthens me.” (Philippians 4:13 – NKJV) 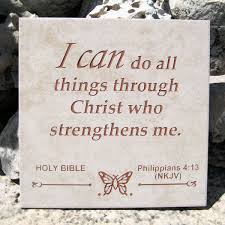 I’ve seen it on purses and in picture frames. I’ve heard it used in reference to football games and weightlifting aims. But are these the things that Paul that was talking about???

In the midst of his closing statements to a congregation that labored in the gospel for Jesus, Paul thanks them from the bottom of his heart for the love that they had shown toward him during his trials for the Lord. And in the context of an exhortation concerning the physical condition of spiritual citizens, a content Paul reminds the church at Philippi that Jesus was his goal whether he was doing better than he deserved or whether he had seen far better days, but none-the-less their diligent gift which had surpassed the efforts of all other churches had lifted his heart and its heart-filling effect had actually reached the throne room in Heaven.

When Paul said he could do all things through the one who strengthened him he wasn’t talking about making it through the minor inconveniences of life whether we’re a believer or not. Paul was talking about making it through the circumstances that came his way because of his faith in Jesus who is the Christ of God. And I don’t believe people are recognizing Philippians 4:13 for what it’s really saying, and that’s why I say that this verse may very well be one of most abused scriptures in the New Testament that people refer to.