Roger Jackson, 74, has preached the gospel of Christ 50 years, often too sick to preach but pressing on. He is a 1970 graduate of the Memphis School of Preaching. Roger and the former Judy Vinson, pictured here in younger years, will be married 56 years on October 3. Today Roger is a very sick man, and he and Judy are struggling financially and need help.

Roger’s preaching career ended in 2019 when he became sick with what they thought was heart problems. He had breathing problems which concerned members of the church where he worked, but he kept trying to do the work he loved.

In October 2019 Roger spent a week in Madison, AL hospital, but was able to continue trying to preach. He only grew worse physically.

December 22, 2019, Roger preached his last sermon. On the following Monday he was taken to Huntsville Hospital where he stayed until January 4. A bone marrow test was performed on him where it was discovered he had pre-leukemia or MDS. Doctors also found his aorta value had stenosis in it, and his diabetes was out of control. Added to that, he had an enlarged prostate. Doctors exclaimed, “He is complicated.”

Roger began chemo treatments in January 2020 by a series of shots once a month, blood test, transfusion for low blood cell, and platelets. Insulin needed for his diabetes is very costly and insurance only covers a small portion of it.

In March 2020, Roger spent 12 days in the hospital with type B flu and pneumonia. Again from June 8-22, Roger suffered with aspiration pneumonia, histoplasmosis pneumonia, UTI, and breathing issues. Though he has been under home health care, his lungs appear almost clear now.

Roger is weak all the time. He is scheduled for another bone marrow test and prostrate procedure this month. Doctors then hope to replace his heart valve.

The Jacksons only income is two small social security checks. Their sicknesses necessitated them starting to draw Social Security at the age of 62. Neither Roger or Judy are able to work now due to their health issues, plus Roger needs Judy to help with his care. They have depended on the goodness of others from time to time, but credit cards have been relied on heavily just to get by. They are struggling financially and need the help of their fellow Christians.

Churches or individuals who are moved to help this deserving family may send checks earmarked for Roger Jackson to the Elkmont church of Christ, 18955 Upper Fork Hampton Road, Elkmont, Alabama 35620, where Steve Ferguson is the Minister. A PayPal account can be accessed by the name: JudyVJackson@yahoo.com, or gifts may be sent directly to their home address: 1802 1/2 W. Market Street, Athens, AL 35611.

God bless you all.

From the second Psalm to the book of Revelation and numerous scriptures in between, the word of God recounts what history books readily concur – the governments of man easily and regularly become hostile toward the kingdom of God. But why?

END_OF_DOCUMENT_TOKEN_TO_BE_REPLACED

Some people like being the boss. People with that mentality can be worrisome – especially in connection to the church.

“But Jesus called them to Himself and said, “You know that the rulers of the Gentiles lord it over them, and those who are great exercise authority over them. Yet it shall not be so among you; but whoever desires to become great among you, let him be your servant.” (Matthew 20:25-26 NKJV)

A boss is not the same thing as a leader. Leaders work with others. Bosses tell others what to do.

Bosses are a part of a hierarchy that never steps back down to the bottom rung of the ladders to help others. They are where they are because they got themselves there. And they thoroughly enjoy it!

The boss mindset won’t work in the church … literally or metaphorically. It may be present, but it exists without the Lord’s approval.

The leader mindset is what it takes: service through example, humility, patience and perseverance. Carrying crosses, giving cups of water, offering words of encouragement and staying loyal to the chief shepherds script is the to-do-list of a leader.

If you like the being boss, you have a problem that can only be solved through the leadership of Jesus.

“And whoever desires to be first among you, let him be your slave—just as the Son of Man did not come to be served, but to serve, and to give His life a ransom for many.”” (Matthew 20:27-28 NKJV)

When it comes to displaying godly behavior, the ways of doing so are numerous. In the latest issue of Gospel Minutes the following point was made after noting Joseph’s willingness to stand-up for his brother Benjamin during his incognito interaction with the rest of his brothers:

The social justice movement abuses the essence of the gospel, but the essence of the gospel comes with the responsibility of societal justice. In other words, we have a responsibility to love our neighbor, and that includes not only doing right ourselves but also helping others when they are wronged. This responsibility can be seen in the lessons of the Good Samaritan, the woman taken in adultery and even in the interaction between Jesus and Simon the Pharisee (not to mention Jesus’ crucifixion and everything that surrounded his injustice).

As Christians, we cannot “fix” the world but we can help others by being a light that reveals the difference between right and wrong.

“But all things that are exposed are made manifest by the light, for whatever makes manifest is light.” (Ephesians 5:13 NKJV)

Sometimes we look for something to pray about. Opportunities and needs abound if we could only identify them. A prayer with a purpose is a prayer with real direction. So here’s a topic that meets all three of these areas. END_OF_DOCUMENT_TOKEN_TO_BE_REPLACED

Last week we wrote under the caption “Questions For Christians About The Church.” This week, as a sequel, we write of “Questions Concerning New Testament Christianity.” END_OF_DOCUMENT_TOKEN_TO_BE_REPLACED

Here’s a link to the latest PDF issue of the Christian Worker.

Here are the topics that you will find:

Christian Worker is an edification effort of the Southwest church of Christ in Austin, Texas.

You can subscribe to the email version of the Christian Worker paper by clicking on the publications link on their website and then following the given instructions…or by clicking on the link provided here in The Fellowship Room under the “Friends” category to your right.

“By faith Moses, when he became of age, refused to be called the son of Pharaoh’s daughter, choosing rather to suffer affliction with the people of God than to enjoy the passing pleasures of sin, esteeming the reproach of Christ greater riches than the treasures in Egypt; for he looked to the reward.” (Hebrews 11:24-26)

Live it up? Moses could have chosen to live it up with the best of today’s children of powerful politicians.

Don’t get distracted with religion? Moses could have chosen to go with the grain and follow his adopted culture’s popular polytheistic ways.

Live for today? Moses could have chosen to see this world as the end all be all when it comes to achievement.

Plain and simple – Moses could have chosen a lot of different things, but he chose a “life for good” over “the good life”, and such is the call that God’s anointed has given us today. 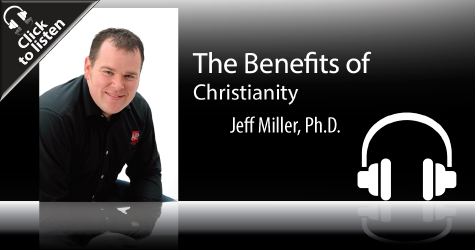 Many reject Christianity, because they see it as too restrictive. The Bible, to them, is a big book filled with rules and regulations that have no apparent reason other than to make humans unhappy. In truth, Christianity is able to yield a depth of happiness and peace that cannot be found anywhere else on Earth. Listen >>

Jesus “said to them all, ‘If anyone desires to come after Me, let him deny himself, and take up his cross daily, and follow Me’” (Luke 9:23 NKJV).  Jesus taught disciples to pray, “Give us day by day our daily bread.’” (Luke 11:3 NKJV).  In His final week before crucifixion, Jesus “was teaching daily in the temple” (Luke 19:47 NKJV).  To every creature, Jesus said, “He who believes and is baptized will be saved; but he who does not believe will be condemned” (Mark 16:16 NKJV).  Scripture promised, “the Lord added to the church daily those who were being saved” (Acts 2:47 NKJV).  Christians followed Jesus because “daily in the temple, and in every house, they did not cease teaching and preaching Jesus as the Christ” (Acts 5:42 NKJV).  Obeying Christ gives someone “daily” work–not “gangs,” “drugs,” or “violence!”

To “make a case” for something is to explain convincingly why it is true or to be believed. This may be done in any number of ways. It involves

looking at the evidence in support of something, and considering its implications. This may also involve considering arguments opposed to it and analyzing what, if any, validity they may possess.

The case for Christianity is strong and convincing. Studying the arguments in favor of Christianity with an open mind can be a faith-building and truly life-changing experience. Such an analysis provides hope and encouragement not only as to this earthly life, but into eternity.  Read >>

You may have seen this before, but it was new to me and I thought it was worth passing along.

I read it in the email bulletin sent out by the Wise church of Christ.

AN ATHEIST’S VIEW ON LIFE

I will live my life according to these beliefs

God does not exist.

It is just foolish to think

That there is a God with a cosmic plan

Is a comforting thought,

Is only wishful thinking.

People can do as they please without eternal consequences.

I am deserving of Hell

“The more you have, the happier you will be.”

Our existence has no grand meaning or purpose

In a world with no God

There is freedom to be who I want to be

It is ridiculous to think

I am lost and in need of saving

A CHRISTIAN’S VIEW ON LIFE

(reread from bottom to top)

END_OF_DOCUMENT_TOKEN_TO_BE_REPLACED

The pieces are pretty much in place. With SCOTUS’ approval today of homosexual marriage, however, the process is nearly complete. Worship in your places of worship, but outside your buildings, keep your voices quiet. The USA no longer has a place for Christians. The threat, not taken seriously when it was made, has been fulfilled, to “fundamentally transform” the United States. END_OF_DOCUMENT_TOKEN_TO_BE_REPLACED

Here is a very simple yet very well written article comparing and contrasting what the Koran teaches about Jesus with what the Bible teaches about him:

Atheism has no rational basis upon which to call anything objectively just or unjust, including racism. If mankind is merely the result of billions of years of mindless evolution and is nothing more than animals (as atheistic evolution contends; Marchant, 2008), then man can

logically make evolutionary-based racist remarks that are consistent with the godless General Theory of Evolution. In fact, Charles Darwin’s “Bulldog,” atheist Thomas Huxley, did just that in his 1865 essay, “Emancipation–Black and White.” He alleged, for example, “no rational man, cognizant of the facts, believes that the average Negro is the equal, still less superior, of the white man.” In truth, if there is no God, mankind could just as easily look down upon and mistreat others (whom he deems are less evolved), as he does roaches, rats, and orangutans (Lyons, 2011; Lyons and Butt, 2009). Those who are Christians, however, logically contend that since (1) God exists, and (2) the Bible is the Word of God, racism is morally wrong–and completely ridiculous for the following five reasons. Read >>