Check out this story for more details.

“The heavens declare the glory of God; and the firmament shows His handiwork.” (Psalm 19:1 NKJV)

When we consider deadly animals, we normally think about venomous snakes, ferocious sharks, crocodiles, or bears. You might be surprised to learn that the animals or organisms most deadly to humans don’t match our mental picture of dangerous creatures. The creature that kills the most humans per year (between 750,000-1,000,000) is the lowly mosquito. Because of the various diseases it spreads, such as malaria, mosquitoes are the animal kingdom’s leading human killers. Another creature that has proven to be extremely deadly is the harmless looking freshwater snail. Read >>

Like I said in my last article about country living perks, when you live in the country there are perks that you get to experience that can’t be found anywhere else.

In the country you have fields, fence-rows and forest edges that come with fringe benefits – namely, those wonderful delicacies of nature called blackberries. And the blackberries are ready to be got…pardon

my English. Blackberries around here are early this year. About 2 to 4 weeks early in fact. Most of the time they aren’t ready until after the beginning, or even well into July, but who’s complaining other than the June Bugs who won’t get to join in on the feast.

Now some of you may be thinking/asking what’s the big deal, you can buy berries in the store and they taste alright – and you’re right, they taste alright – but picking the ones that came free of charge and finding the every other one that naturally tastes as sweet as jelly is where it’s at!

And in case you’re wondering, every one of those blackberries in the picture were of supreme jelly quality according to my daughter and my own humble opinion.

Speaking of my daughter, the memories made of picking blackberries together with your family can’t be found in grocery store – as one commercial tries to say, it’s priceless.

Oh yeah, blackberries are just another perk, amongst the many, of living in the country.

My wife and I live in a small house out in the country surrounded by fields and woods on every side.

When you live in the country there are perks that you get to experience. Perks that can’t be experienced even in the city limits of a small town much less a big city. One of these perks is lightning bugs. 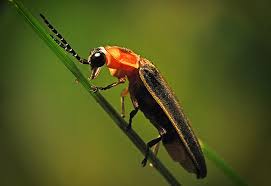 This year has been a “bumper crop” for Lightning Bugs. The fields and woods are teeming with them. For those who have never had the privileged of experiencing this once a decade event, the only comparison that I can think of is the way that the light of a brightly lit full moon dances atop the water of a lake or the ocean, or even the way a sports arena brilliantly pops with the lights of camera flashes as a big game begins or when a big time play is made. The Lightning Bugs are everywhere! From the grass to the tops of the trees and everywhere in between they are consistently lighting up the night-time sky in their own random way. If you sit still to take in a panoramic view they can be mesmerizing.

Where I live there are several bugs that “swarm” my yard in the spring and summer, including the June Bug and some type of wasp looking bug (but they’re harmless) that hovers close to the ground, but the Lightning Bug takes the cake with its free night-time light display. And that’s why I say that Lightning Bugs are one perk, amongst the many, of living in the country.

Here’s an email I received from a good friend. I can’t say it made me laugh out loud or anything, but it did put a smile on my face and I thought it was worth passing along. Just click on the link and you’ll see what I mean.

I’ve received many remarkable nature photographs over the years but this photo of a nesting Falcon is perhaps the most remarkable nature shot that I’ve ever seen. I hope you enjoy it as much as I did. Nature is truly breath-taking!
A FALCON NESTING IN A TREE

What feature of creation causes you the greatest wonder, the deepest awe, at the power and wisdom of God? Perhaps that impressive range of mountains near you, or the flitter of a butterfly, or the intricacy of the human eye. The possibilities are nearly endless.

You know the verses that talk about creation as the evidence of God’s hand.

Just a note: the world calls it “nature,” but Scripture never calls creation that. What exists is not merely what is (nature), but what God spoke into being (creation).

Favorite nature spot? The Daily Nudge was prompted by our little trip to the mountains earlier this week. My reply: Anywhere land and sky and sea meet. I remembered a piece I wrote back in 2000 and was able to locate it. (I might just start believing in miracles today.) It celebrated a night visit to the beach in the midst of teaching the Bible. If you want to dive into the surf of my essay, it’s here, just for you.

Whatever the part of nature we enjoy, “all nature sings” the glory of God.

My favorite nature spot is Red River, NM. Not a skier, so I don’t go there in the Winter. I like to go in the summer, but best of all in the Fall. In the Summer the Church of Christ there hold an encampment every year. In the Fall all the trees are turning to pretty colors, especially the bright yellow of the Aspens. In you want an internet visit. http://www.redriver.org/

My favorite nature spot is New Zealand. It is the most beautiful place on earth.

Canoeing down the spring-fed rock-bottomed Northfork river in southern Missouri does wonders for my attitude. Lots of rock bluffs and trees. It is hard not to ponder the incomparable skill of our amazing Creator as you float down the river. I feel more relaxed and serene just thinking about it.

One more nature spot that is really spectacular: Yosemite and its waterfalls:

My favorite nature spot? When I had money and could travel, my favorite spot was around the Gunnison, Colorado area:

You can see all kinds of landscapes, scenery, and wildlife. Really beautiful!