As I alluded to a couple of times in the previous post, studying God’s word is necessary because of its source and because of its source the Bible reveals and gives insight to something that we’re not able to see with our physical eyes alone – and that’s the mind of God. We know what we know about God because God has revealed it about Himself to us through His written word. If we use any source other than God’s word recorded in the Bible whether it be secular or religious to try to explain the will of God we become no different from anyone else who “speaks for God” but contradicts His word.

This is not to say that the existence of a Creator cannot be seen through the existence of creation for even Psalm 19:1-6 says this much. But the difference between knowing that there is a Creator and personally knowing that Creator’s will can be huge; this is where the word of God comes in. God’s word opens the door to a proper relationship with Him by opening 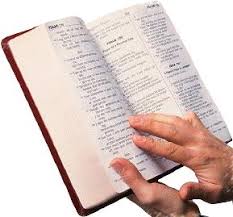 our eyes to His will. Read further into Psalm 19 and you’ll find that, “The law of the Lord is perfect, converting the soul; the testimony of the Lord is sure, making wise the simple; the statutes of the Lord are right, rejoicing the heart; the commandment of the Lord is pure, enlightening the eyes;” (Psalm 19:7-8).

The word of God has revealed the will of God for our lives, and this will of God contains commandments, guidance, hope, love and correction, all of which have been given for our benefit. And contrary to what some try to teach concerning God’s word and will, the fact that God wants us to understand His will means that we can understand it. Ephesians 5:17 says, “Therefore do not be unwise, but understand what the will of the Lord is.”

The Spirit-Breathed word of God has revealed the mind of God through the wisdom of God so the salvation of man can be understood by the will of God to the glory of God! And that’s just one more reason why we should study the Bible.

“But as it is written: “Eye has not seen, nor ear heard, Nor have entered into the heart of man the things which God has prepared for those who love Him.” But God has revealed them to us through His Spirit. For the Spirit searches all things, yes, the deep things of God. For what man knows the things of a man except the spirit of the man which is in him? Even so no one knows the things of God except the Spirit of God. Now we have received, not the spirit of the world, but the Spirit who is from God, that we might know the things that have been freely given to us by God. These things we also speak, not in words which man’s wisdom teaches but which the Holy Spirit teaches, comparing spiritual things with spiritual. But the natural man does not receive the things of the Spirit of God, for they are foolishness to him; nor can he know them, because they are spiritually discerned. But he who is spiritual judges all things, yet he himself is rightly judged by no one. For “who has known the mind of the Lord that he may instruct Him?” But we have the mind of Christ.” (1 Corinthians 2:9-16 – NKJV)